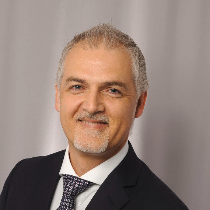 Dipl.-Ing. Axel Fuchs, was born in 1967 and made his university-entrance diploma (Abitur) at the Technical Gymnasium in Ravensburg. He is a skilled die maker as well.

After a few years practising as a die maker, he graduated in mechanical engineering, specialized in production technology and management, at Corporate State University Baden-Württemberg in Ravensburg and LIEBHERR AEROSPACE in the field of aerospace technology.

He worked many years for the automotive industry in the fields of BIW and joining technology, for well known companies as a designer and planner.

Afterwards he joined MÜLLER WEINGARTEN AG and SCHULER AG, the world leading companies in metal forming, engineering and manufacturing of presses and large dies, for more than ten years. He started as a product and project manager and later on he was in charge of different departments in the business field blanking and forming technology.

Axel Fuchs was in charge of project planning, project management, sales and product development. Since 1996 he is frequently doing business and travelling to China, India, Korea, North- and South America and Europe. Since that time he gathered precious intercultural experience and country-specific know-how in business.

During his career, Axel Fuchs developed one patent for an optical centering and aligning system and many innovative products, which are still working efficient and reliable at customer plants worldwide. more…

In former times he was a member of the VDI-committee of experts for large stamping dies and publicized in well known technical magazines. In 2008/2009 he was an associate professor in the subject of stamping and stamping machines including laboratory activities at the University of Applied Science Ravensburg in Weingarten.

In 2010 Axel established afu-tech, after a very successful career of 24 years in the automotive, press-, die- and BIW-engineering industry. afu-tech is an international operating technology and management consulting company. Based on his tremendous knowledge, Axel Fuchs was as a professor at the University of applied science in Weingarten, he is also a speaker at conferences and companies (e.g. Brazil, US, SIEMENS AG). In 2013 he was member of the examination board of the Corporate State University Baden-Württemberg at Friedrichshafen Campus.